This article covers method to resolve Source Not Starting in Nagios for our customers. Generally, it happens when you added a new source, but it did not automatically start.

When creating a new Source in Network Analyzer it creates the directory structure - the folders where it will store flow data, the RRD data file, and the processes pid file. It also starts the Source (nfcapd or sfcapd) automatically once it's finished creating the new directories. Here's a couple reasons why it may not be starting.

This problem can be resolved by installing the rrdtool-python module the following command:

Once installed restart the nagiosna service:

The Source should now start

To fix this Nagios error:
Execute the command:

Running the command above simply starts the nagios daemon and points it to a specific config file.
The advantage to running this command manually over systemd is that when you run "service nagios start" this typically calls the /etc/rc.d/init.d/nagios script which contains a line with parametrized environment variables:

Because every system is different, not specifying either the bin nor config directories could lead to nagios breaking (stopping) when it tries to start using the default installation directory paths 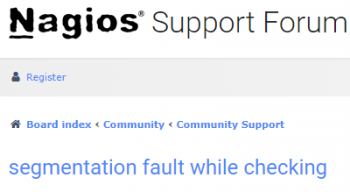 This article covers how to fix the Segmentation fault in Nagios.

A segmentation fault (aka segfault) is a common condition that causes programs to crash; they are often associated with a file named core .

Segfaults are caused by a program trying to read or write an illegal memory location.

What does segmentation fault mean in Linux?

A segmentation fault is when your program attempts to access memory it has either not been assigned by the operating system, or is otherwise not allowed to access. "segmentation" is the concept of each process on your computer having its own distinct virtual address space.

Typical causes of a segmentation fault:

2. Attempting to access memory the program does not have rights to (such as kernel 3. structures in process context)

4. Attempting to write read-only memory (such as code segment)

3. Update and upgrade your repository cache.

4. Now upgrade your distribution, it will update your packages.

5. Find the broken packages and delete them forcefully. 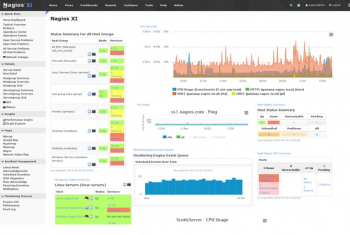 This article will guide you through the steps to perform #debugging of #bandwidth #performance #graphs in #Nagios. 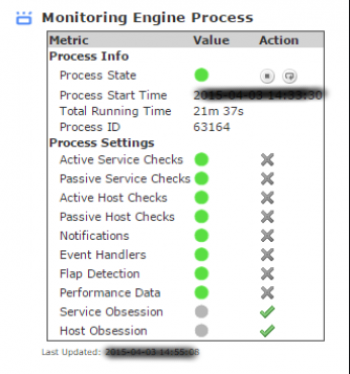 This article will help to fix performance issues in Nagios when performance graphs does not display the correct data even though their checks return true performance data.

How to fix scheduled backups no longer working in Nagios

This article will guide you on how to solve Nagios scheduled backups failure which occurs when the database is currupted.