Transit VPC Google cloud networks - All you need to know ? 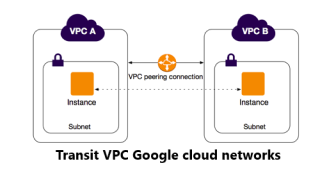 Google Cloud VPC Network Peering allows internal IP address connectivity across two Virtual Private Cloud (VPC) networks regardless of whether they belong to the same project or the same organization.

Here at Ibmi Media, we shall look into more about transit VPC Google cloud networks.

Today, we will demonstrate how to set up a transit network. In this scenario, let's assume there are three VPC networks, namely, network-1, network-2, and network-3.

Here, network-1 is peered with the other two networks. Moreover, the three networks import and export custom routes while network-1 acts as the transit network, as the VPN tunnel is shown in this guide.

What to know about Encryption in VPC Transit Network ?

[Need help in fixing Google Cloud issues ? We can help you. ]

This article covers an overview of Transit VPC Google cloud networks. In fact, transit connectivity is a solution where we can connect a network with multiple peered networks, it can act as a centralize transit hub through which we can route traffic to multiple VPCs together so it will save overall cost to set up multiple VPNs between networks.

VPC Network Peering is useful in these environments: