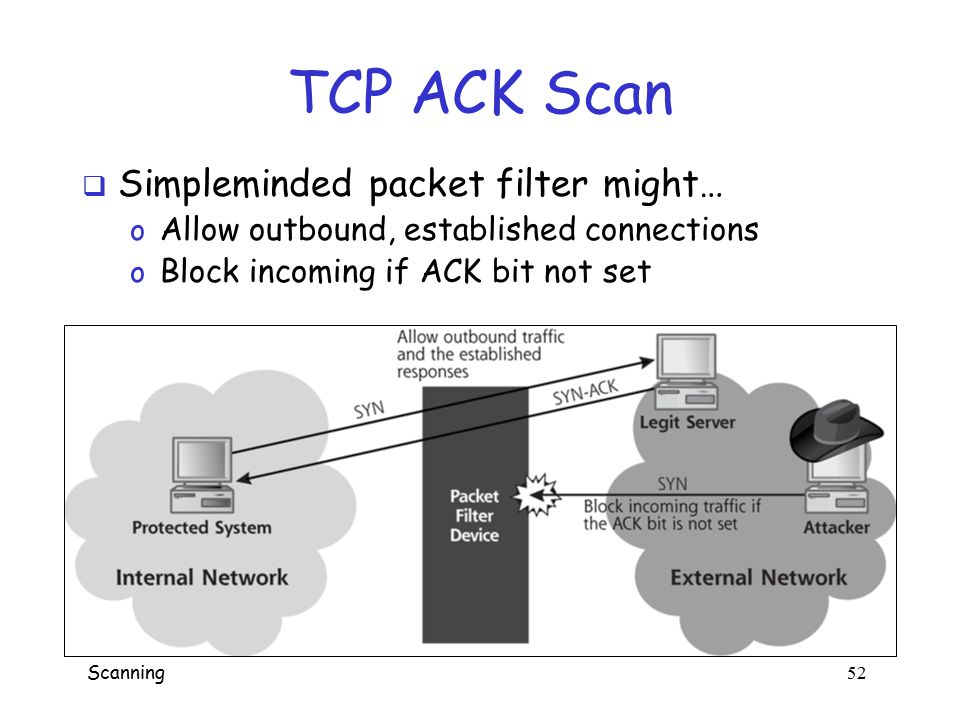 Are you trying to mitigate ACK scan DOS attack?

ACK scans are generally used to identify ports or hosts that may be filtered to resist any other form of scanning.

Here, a target system is presented with a packet with the ACK flag set with a sequence number of zero to an interesting port (such as,  port 25).

This can crash our router and make it out of service.

Here at Ibmi Media, as part of our Server Management Services, we regularly help our Customers to prevent any form of DOS attack.

In this context, we shall look into ways to mitigate DDoS attacks.

A target system is presented with a packet with the ACK flag set with a sequence number of zero to an interesting port.

Generally, if the sequence number is not zero, there is a violation of TCP rules associated with that parameter.

And the target sends back an RST. The presence of the RST provides an attacker a good indication that the host is alive but behind some form of filtering like a firewall, a router, or even some proxies.

A TCP ACK segment when sent to a closed port or sent out-of-sync to a listening port, the expected behavior is for the device to respond with an RST. This helps the attacker to get an idea about the type of firewall.

When combined with SYN techniques an attacker will get a clear picture of the types of packets that get through to a host and can understand the firewall rule-set.

ACK scanning, when combined with SYN scanning, also allows the adversary to analyze whether a firewall is stateful or non-stateful.

You can apply the following rules;

In the first rule, the assumption is that the Acknowledgment flag will be set and the sequence value will be set to “0”.  This will make the target return an “RST”.

Any SYN-ACK responses are possible connections: an RST(reset) response means the port is closed, but there is a live computer here. No responses indicate SYN is filtered on the network.

An attacker can scan the router or send unwanted traffic/request like SYN,ACK,FIN to specific UDP/TCP Port.

Generally, if the router is accessible from outside of the network, the attacker can access it by brute force.

A typical Probe response is given below:

An example of a typical ACK scan:

1. Set up a firewall to filter scan attempts.

We can use the following commands to filter scan attempts with iptables:

2. Reset the IP if it’s dynamic. Just turn the router off for the DHCP lease time or spoof a different MAC address.

We can use the following IPtables commands for this:

[Need urgent assistance to mitigate ACK scan DOS attack? We are happy to help you. ]

This article will guide you on how the ACK scan DOS #attack works as well as methods to mitigate this.

A port scan can help an attacker find a weak point to attack and break into a computer system.

Denial of service attack (DOS) is an attack against computer or network which reduces, restricts or prevents accessibility of its system resources to authorized users. The network of Bots is called botnet.

A Fraggle Attack is a denial-of-service (#DoS) attack that involves sending a large amount of spoofed UDP traffic to a router's broadcast address within a network.

It is very similar to a Smurf Attack, which uses spoofed ICMP traffic rather than UDP traffic to achieve the same goal.

2. ICMP flood – leverages misconfigured network devices by sending spoofed packets that ping every computer on the targeted network, instead of just one specific machine.

3. SYN flood – sends a request to connect to a server, but never completes the handshake.

i. Install a Firewall: A firewall can help prevent unauthorized access to your private network.

ii. TCP Wrappers: TCP wrapper can give administrators the flexibility to permit or deny access to the servers based on IP addresses or domain names.