How to Provision docker containers with Ansible 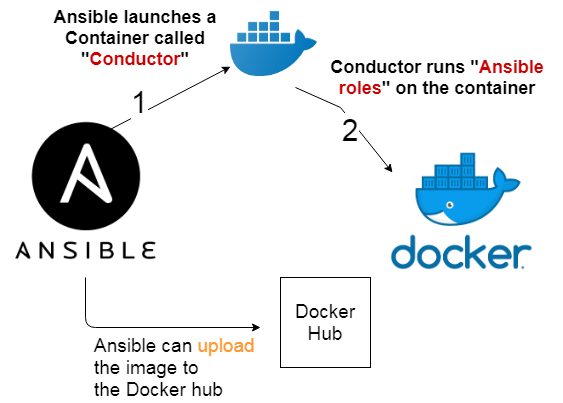 Ansible is the easiest way to automate Docker in your development environment. Ansible allows you to automate your Docker container build and deployment method in means that you're likely doing manually.
Here at Ibmi Media, as part of our Server Management Services, we regularly help our Customers to perform Docker related tasks.
In this context, we shall look into how to provision docker images using Ansible.

How does Ansible provision Docker container?

Ansible uses “Ansible Container”. It is a package that handles the process of running roles on a Docker container.
In other words, it launches a container called "Conductor". Also, all the required packages are present in this container. The conductor then connects to the target container and runs the roles. Once, an image is created we can upload it to the Docker hub or any other registry.
Now let's take a look at the process to build Docker Containers using Ansible.

How to install Ansible Container ?

To build Docker images, we need to install “Ansible-Container”. By default, it does not ship with Ansible.

1. First, we install Ansible-Container in order to build the Docker images.

2. Next, we run the command below to verify that it has successfully installed.

It should work without any errors.

After the installation of the Ansible Container, we create our project directory by executing the below commands:

As a result, the Ansible container will create the below files:

Then we will create a directory to hold our roles:

Let's consider “container.yml” as the Docker Compose file. In this file, we will list the roles that we would like to run on our Container.

This syntax is quite similar to the Docker compose file. We declare our conductor image at the top and then under services, we declare the services. Also, we can have multiple services. However, the most important part is the roles section.

How to Build Ansible Container ?

In order to build a container, we need to use:

This will launch the “conductor” container. After being ready, it will run the Ansible roles to the target container.
Now, that we have our roles executed on the target conductor.
Finally, we run the service:

This article will guide you on how to provision docker #containers using Ansible. #Ansible seamlessly automates #Docker and the process of building and deploying containers.
Ansible Container will allow users to build, #deploy, and orchestrate containers at scale, all from Ansible playbooks.