Rewrite URLs with mod_rewrite for Apache on Ubuntu 16 04 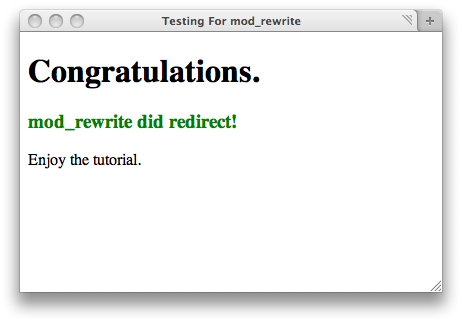 Here at Ibmi Media, as part of our Server Management Services, we regularly help our Customers to perform Apache related queries.

In this context, we shall look into the method  to rewrite URLs with mod_rewrite in Apache.

How to rewrite URLs with mod_rewrite in Apache ?

Here, to rewrite URLs with mod_rewrite, we will use the following;

a. One Ubuntu 16.04 server set up with this initial server setup tutorial, including a sudo non-root user and firewall.

b. Apache 2 installed on your server. This requires Apache, MySQL, PHP (LAMP) stack on Ubuntu 16.04.

First, we need to activate the mod_rewrite so that Apache will understand the rewrite rules. Normally, it will be already installed. But will be disabled on a default Apache installation. So we run the below command to enable it.

As a result, this will activate the module or alert that the module is already enabled. Then we restart the Apache so that the changes take effect.

We can modify the rewrite rules without accessing server configuration files by using the .htaccess file.

Before we start using the .htaccess file, we set up a few and secure a few more settings.

By default, Apache prohibits using a .htaccess file to apply rewrite rules. So first we allow changes to the file. For that, we open the default Apache configuration file using the nano text editor.

Inside that file, we will find a <VirtualHost *:80> block starting on the first line. Within that block, add the following new block so your configuration file looks like the following. Make sure that all blocks are properly indented.

We save the file and close it. In order to put these changes into effect, we restart Apache.

Now, we create a .htaccess file in the webroot.

Then we add this line at the top of the new file to activate the rewrite engine.

Finally, we save the file and exit.

Here, we will set up a basic URL rewrite that converts URLs into actual paths to pages. Specifically, we will allow users to access http://your_server_ip/about, but display a page called about.html.

First, we create a file named about.html in the webroot.

Next, we copy the following HTML code into the file, then we save and close it.

Let's create our URL rewrite rule. For that, we open the .htaccess file.

After the first line (containing ‘RewriteEngine on’), we add the below line.

In this case, ^about$ is the pattern, about.html is the substitution, and [NC] is a flag.

i. ^ indicates the start of the URL after your_server_ip/.

ii. $ indicates the end of the URL.

iii. about matches the string “about”.

iv. about.html is the actual file that the user accesses.

v. [NC] is a flag that makes the rule case insensitive.

We can now access http://your_server_ip/about in the browser. In fact, with the rule shown above, the following URLs will point to about.html:

http://your_server_ip/about, because of the rule definition.

http://your_server_ip/About, because the rule is case insensitive.

http://your_server_ip/about.html, because the original proper filename will always work.

However, the following will not work:

http://your_server_ip/about/, because the rule explicitly states that there may be nothing after about since the $ character appears after about.

http://your_server_ip/contact, because it won’t match the about string in the rule.

[Need urgent assistance with Apache queries? – We are here to help you.]

This article will guide you on how to rewrite URLs with mod_rewrite in #Apache. Basically, mod_rewrite helps in creating human-readable URLs.

The URL #Rewrite #Module is an extension software for #IIS (Internet Information Services). URLs should be created so that they are easy to remember for the users and easy to find for the search engines. The URL Rewrite Module enables web administrators to develop and implement rules that assist them in this task.

htaccess rewrite rule includes setting a combination of rewrite condition ( #RewriteCond ) tests along with a corresponding rule ( #RewriteRule ) if the prior conditions pass. In most cases, these rules should be placed at any point after the RewriteEngine line.