Advantages of NoSQL Databases - Get to know them now 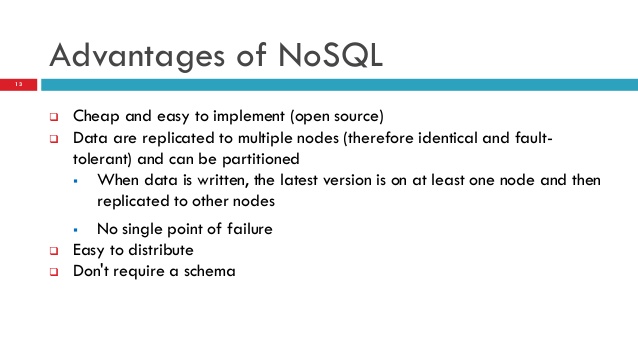 Need to know the benefits of NoSQL Databases?

Above all the design of NoSQL is in such a way that it stores distributed data on a large scale and has a fixed schema.

MongoDB is a NoSQL database that we widely use as it offers very quick write speeds, fast querying.  Also, it can easily distribute large data sets across a cluster of servers.

NoSQL seems to work better on both unstructured and unrelated data. NoSQL databases give up some features of the traditional databases for speed and horizontal scalability.

Here at Ibmi Media, as part of our Server Management Services, we regularly help our Customers to perform MongoDB related queries.

In this context, we shall look into some advantages of NoSQL Databases.

The following are the main benefits of NoSQL Databases:

The economic advantages of scaling out on commodity hardware become irresistible.

Meanwhile, RDBMS might not scale out easily on commodity clusters. The design of NoSQL databases helps to expand transparently to take advantage of new nodes.

Over the decade, an increasing amount of data large volumes of data are being stored massively. The constraints of data volumes that are being managed by a single RDBMS are concerning some enterprises.

Today, NoSQL systems such as Hadoop handle the volumes of “big data” better than RDBMS.

Maintaining high-end RDBMS systems can be done only with the assistance of expensive, highly trained DBAs.

The result is that the cost per gigabyte or transaction/second for NoSQL is many times less. Thus, allowing us to store and process more data at a much lower price point.

NoSQL databases have fewer or no data model restrictions than RDBMS. However, NoSQL Key Value stores and document databases allow the application to store virtually any structure it wants in a data element.

A few characteristics associated with a NoSQL database

Following are a few characteristics of a NoSQL database:

1. It doesn't use SQL as its query language:

NoSQL database systems rose alongside major internet companies, such as Google, Amazon, and Facebook, which had significantly different challenges in dealing with huge quantities of data that the traditional RDBMS solutions could not cope with.

Above all, NoSQL database systems were made in such a way that they can manage large volumes of data that do not necessarily follow a fixed schema.

2. It may not give full ACID guarantees:

Usually, only eventual consistency is guaranteed or limiting transactions to single data items.

3. It has a distributed, fault-tolerant architecture:

Several NoSQL systems employ a distributed architecture. The system can easily scale out by adding more servers and can tolerate the failure of a server.

A database schema is the structure of a database system, described in a formal language supported by the database management system.

In other words, collections are schema-free, which means they can store different types and structures of documents within a single collection.

To scale horizontally means to scale out. In a NoSQL system, the data store can be much faster as it uses scale-out.

Key Reasons to use a NoSQL database

Following are some of the use cases where it is sub-optimal to use a conventional database:

1. A relational database will not scale to our traffic at an acceptable cost.

3. Generally, business models may generate a lot of temporary data that does not really belong in the main data store.

4. Relational database has already been denormalized.

5. When we need to run queries against the data that do not involve simple hierarchical relations.

The following section describes the different types of NoSQL datastores.

[Need urgent assistance to set up MongoDB on your Ubuntu Server? We are available to help you today. ]

The structure of many different forms of data is more easily handled and evolved with a NoSQL database.

NoSQL databases are often better suited to storing and modeling structured, semi-structured, and unstructured data in one database.

NoSQL Database is a non-relational Data Management System, that does not require a fixed schema.

It avoids joins, and is easy to scale.

The major purpose of using a NoSQL database is for distributed data stores with humongous data storage needs.

NoSQL is used for Big data and real-time web apps.

Reasons to Use a NoSQL Database includes:

2. Using cloud computing and storage. Cloud-based storage is a great solution, but it requires data to be easily spread across multiple servers for scaling.

There are four big NoSQL types:

Each type solves a problem that can't be solved with relational databases.

Actual implementations are often combinations of these.

OrientDB, for example, is a multi-model database, combining NoSQL types.