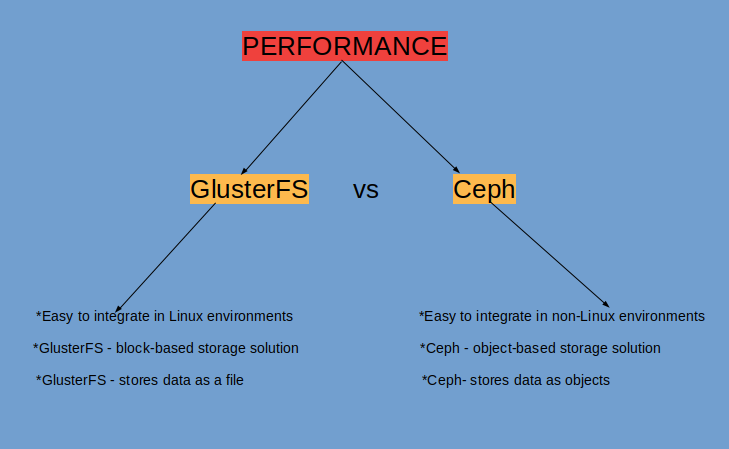 Let's see what makes them different from each other.

Distributed file systems are a solution for storing and managing data that no longer fit onto a typical server. Lack of capacity can be due to more factors than just data volume.

Here at Ibmi Media, as part of our Server Management Services, we regularly help our Customers to choose the right storage manager.

In this context, we shall perform an analysis of GlusterFS vs Ceph performance.

More about GlusterFS vs Ceph performance?

There are multiple distributed storage management packages including GlusterFS, Ceph, RockStor, MooseFS,  and so on. But choosing the right among these based on their performance is really difficult.

Recently, one of our customers approached us with a request to suggest  him the best among GlusterFS and Ceph. He needs a storage where he can quickly scale up or scale down his data. He also mentioned that he is not going to store any massive data without any movement for a long period. As the client needed that kind of storage management, our Support Experts suggested him to use Ceph.

Based on the requirements of our customers, we suggest the best as both GlusterFS and Ceph have their own positives and negatives when it comes to their performance.

Differences between GlusterFS and Ceph performance?

GlusterFS is a block-based storage solution. It manages stored data as a file hierarchy rather than as objects. Which stores data on connected cluster devices and access data sequentially. So it suits best for storing large-scale data.

Whereas, Ceph is an object-based system.

It manages data as stored objects rather than following a file hierarchy. In Ceph, data distributes over larger node-sets and many drives are able to parallelly input data from the replica copies.

Ceph distributes data in a cluster across the computers and it allows the users to access all of the data at once via the interface. Whereas Gluster keeps everything together by distributing data to computers that are connected with each other.

GlusterFS is mostly associated with Red Hat and Ceph has been widely adopted by the open-source community.

GlusterFS vs Ceph Performance - Which is better ?

Gluster can handle a high number of files but when coming into performance this massive data handling slows it down. So, we do not suggest Gluster in handling data that requires high speed.

In such cases, Ceph is the best as it accesses the data rapidly.  For managing storage, Ceph uses its own tools. So, this self-managed system can reduce operating expenses when comparing with GlusterFS.

Both the Ceph and Gluster are good choices but their areas to perform well are different.

They have their own areas to prove their talent. So, opting between GlusterFS vs Ceph always depends on the area and requirement.

[Having trouble when choosing best based on GlusterFS vs Ceph performance? – Our Experts are available 24/7. ]

This article will guide you on the differences between GlusterFS vs Ceph Performance. The decision on transfer sizes could itself account for Ceph running faster or slower than Gluster.

Deciding whether to use Ceph vs. Gluster depends on numerous factors, but either can provide extendable and stable storage of your data.

Ceph and Gluster are both systems used for managing distributed storage. The goal is high performance, massive storage, and compatibility.

GlusterFS and Ceph are two distributed persistent storage systems. #GlusterFS is at its core a network filesystem.

Ceph is at the core an object store.